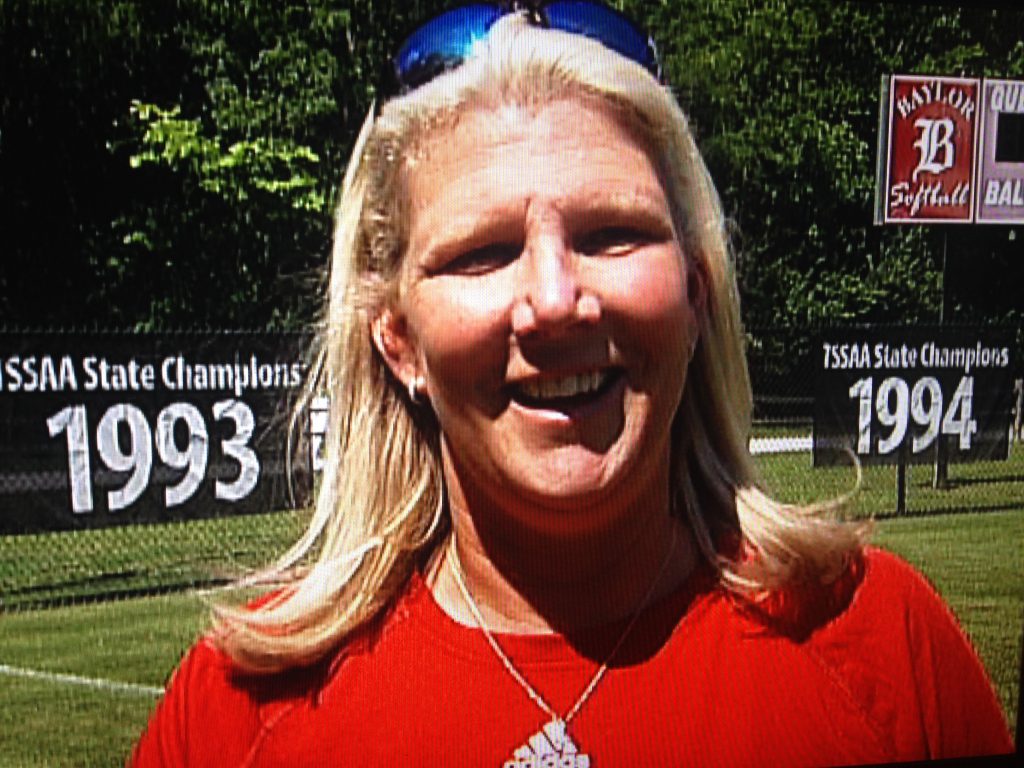 Chattanooga-(WDEF-TV) Baylor softball coach Kelli Smith has won twelve state championships with the Red Raiders, so imagine what her ring collection looks like.
And this week, she’ll try to add to her jewelry bling at Spring Fling.

It’s hard for anyone to envision twelve state titles, but Kelli Smith did envision becoming a coach.
Said Smith:”My summer team we were traveling all over the country, and we would get to a big tournament out of town in Texas or California, and everybody would load up and go to Six Flags or the water park, and I would go with the coaches to the ball field to scout.”
Every state banner hanging at Baylor, Kelli Smith has been a apart of all twelve of them.
Said Smith:”It’s an awesome feeling. Baylor is my second home. I love this place. It doesn’t say Kelli Smith state champions. We’ve had some amazing student athletes, and I’ve got a wonderful coaching staff.”
Now about those championship rings, where do you put all of them?
Said Smith:”I actually have one of our current players Acelynn Sellers. Her grand dad made me a beautiful hand-made wooden box or jewelry box, and I keep them displayed in that.”
Reporter:”Do people ever call you ‘Lord of the Rings’? (laughs) No. I haven’t heard that one before. They joke about if I put them on my toes you know and all that.”
And the journey to get those title rings is always emotional.
Said Smith after their 2016 state title:”Look there. That’s why it doesn’t get old right there. That’s why it doesn’t get old. Those girls right there. That’s why I do it. It never gets old.”

Said Smith:”But each team every year no matter how long they are apart of our program, each team is unique and special. And throughout that, life occurs. In 2013 we dedicated our season to Kelly Moore. Her daughter Sarah Moore was senior that season, and Kelly was battling breast cancer. So the team dedicated the season to her, and said hey coach if we win the state this year, can we put a pink stone in our ring. I said absolutely. Of course last year losing my father. I’ve got dad written on this state championship ring.”
Reporter:”When you call the ring guy, does he just start laughing saying you can’t be serious. Another one?”
Said Smith:”That’s my favorite phone call to make every year.” (laughs)