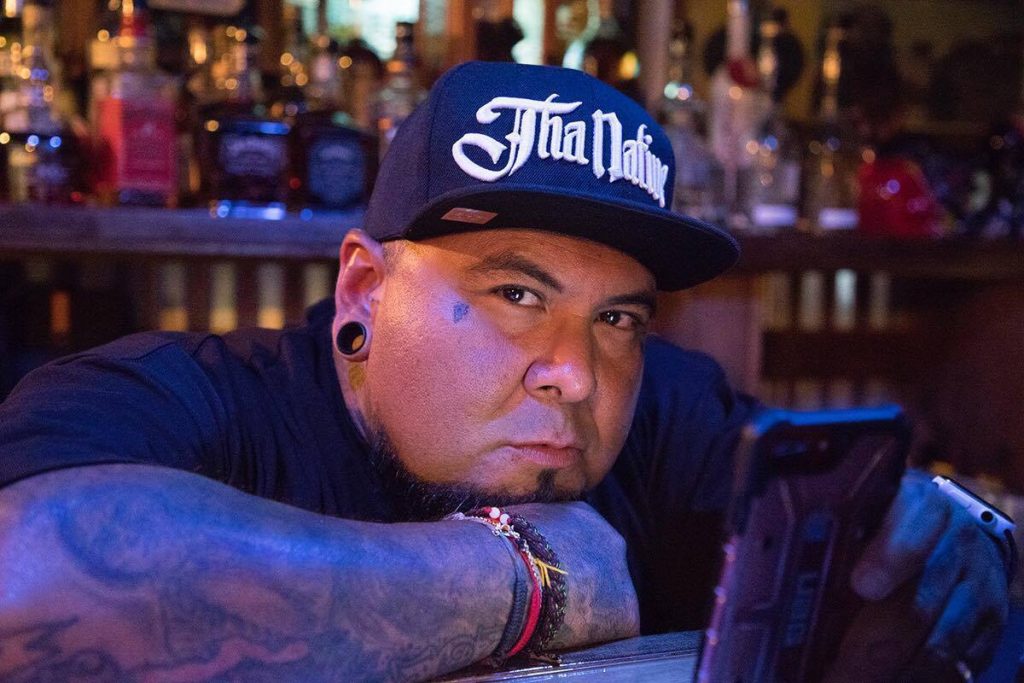 2018 was an impactful year for Highland, California recording artist Tha Native (FKA Short Dawg Tha Native). Releasing two hit singles in the Tech N9ne-featured “Whatcha Wanna Do” and the E-40-featured “Go Get Your Paypah”. Followed by hitting the road with E-40 on his nationwide Gift of Gab tour, in support of the latest album by the West Coast veteran of the same title. Gaining tremendous amount of new fans at every stop as Tha Native opened up for the Yay Area Ambassador.

Having also toured with Tech N9ne as well, Tha Native reflects on the difference in audiences between the two legends.

Hailing from the High Desert, Tha Native originally came into the spotlight over a decade ago (2008) with a passion for the genre, creativity, and a lot of pride. A well-known Native American, Tha Native always incorporates his deeply-rooted heritage with his amazing lyrical abilities. Inspired by so many West Coast legends, Tha Native’s style is authentic, entertaining, and refreshing West Coast oldies sound. Tha Native made a name for himself taking center stage and performing in front of undiscovered crowds on various nationwide tours throughout the decade.

I used to go by Short Dawg Tha Native. The reason I would go by Short Dawg Tha Native is because they (friends) always called me Shorty growing up. But then I just took the Short Dawg part out due to mix-ups in artists. So then I just went with Tha Native because it’s who I am. I am Native America. I am indigenous. I have been in the West Coast forever. I am an Original West Coast Native Hip-Hop Artist. My name represents who I am, who my people are, and we been in the West Coast forever before boats and houses were built. I am an Original Native American Hip-Hop Artist.

Tha Native also credits life on the road for his stage presence and how to conduct business. Reciting what headliners have taught him:

“They have taught me about being responsible, being respectful, and being 100% on stage. Having respect for your fellow artist. Always helping out the up and comers and always giving other artists a chance. That’s one thing they always do. They always pave the way for others to have the success that they have and that’s awesome.”

2019 only appears to be even bigger for the entertainer. Scheduled to hit the road again, along with the release of more new music and forthcoming new album. With an already noteworthy resume including collaborations with Too Short, E-40, and Tech N9ne, we definitely look forward to which legends will come to impart their classic lyricisms on the next project from the rising star.

Tha Native’s thoughts on the near future of music:

“I think streamings a good thing. There has to be a way to sell your music with streaming. I think it affects the Music in a good way. It’s like they say, “The sign of the times”. You have to keep up with it. It’s forever changing, you know? It’s where all the business is actually going. It’s not about hard copies of anything anymore. It kinda sucks but that’s just the way it is and I don’t think that’s ever going to change. I feel like all people that know vinyl and cds know when the real music was out. I mean it’s easier for a lot of people to hear you now, you don’t have to be distributed through stores anymore in order to be heard. You can just put it on your site and whoever is following you can hear it and then you get big that way. Thats what helps the industry and music today. You’re able to hit a 1,000 people rather than 500 on your streak and you can go have it streaming now and have millions of people now rather than 500 or 1000 and now you can promote it without even having a record label. It gives you more independence. It’s just that everybody has to change with the times. I wish it wasn’t like this because I’m a collector of records and cds and it sucks that you can’t find the physical art in your hand anymore.”