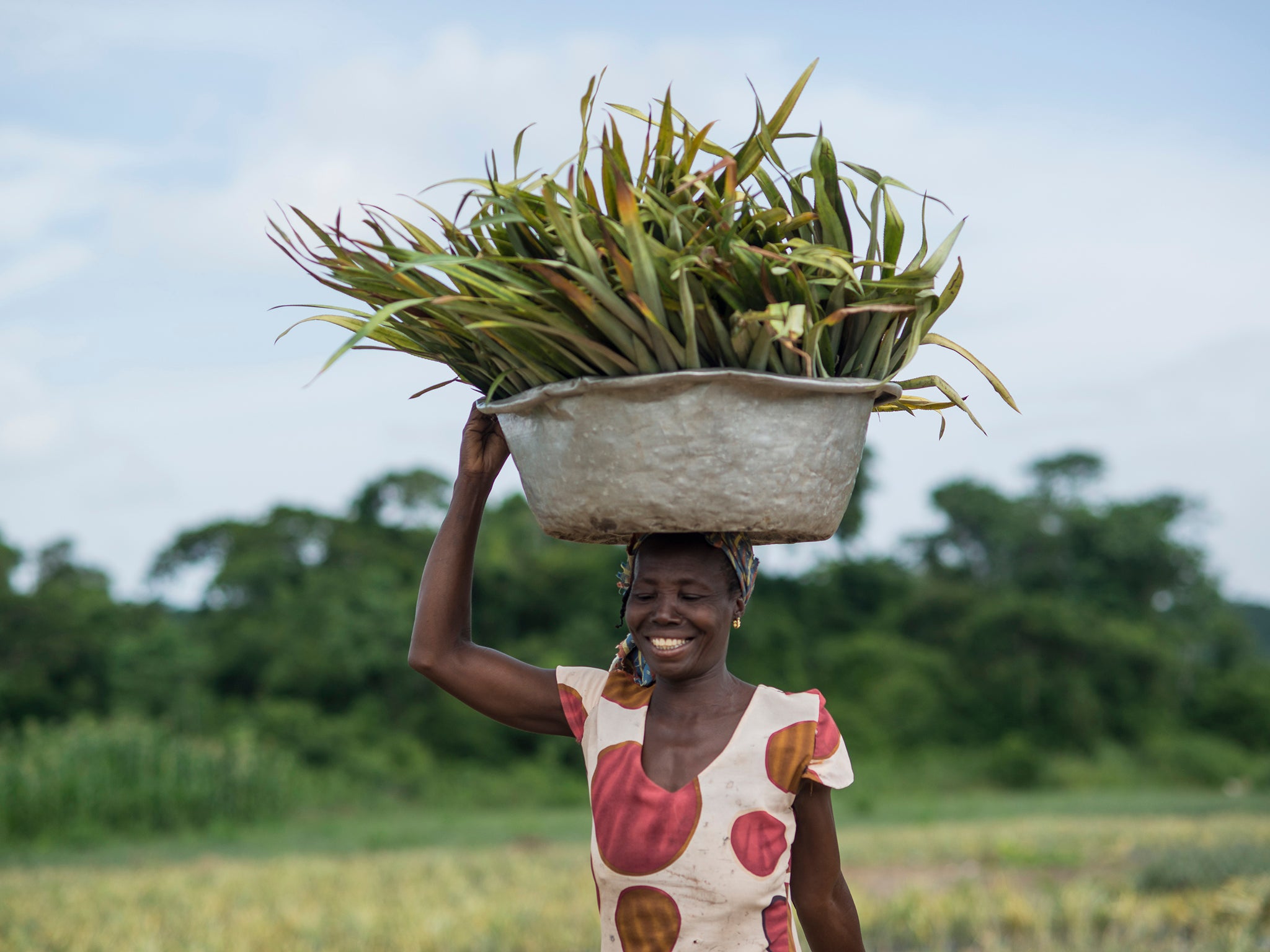 After he graduated from university, Vozbeth Kofi Azumah was reluctant to tell anyone – even his mother – what he planned to do for a living.

“I’m a farmer,” he says, buzzing his motorcycle between freshly plowed fields in Agotime Beh, Ghana. “Here, that’s an embarrassment.”

In some parts of the world, farmers are viewed with respect and cultivating the land is seen as an honourable trade. But in a region where most agriculture is still for subsistence – relying on cutlass, hoe and a hope for rain – farming is a synonym for poverty.

We’ll tell you what’s true. You can form your own view.

But Azumah is among a growing number of young, college educated Africans fighting the stigma by seeking to professionalise farming. They are applying scientific approaches and data-crunching apps not just to increase yields, but to show that agriculture can be profitable.

They call themselves “agripreneurs”.

It’s a steep challenge. Undeveloped distribution networks, poor roads and fickle water supplies are difficult hurdles for even the most competent farmer, and many of these would-be farmers have little training or experience.

However, these agricultural entrepreneurs hope both to make money and to tackle the confounding calculus of a continent that holds about 65 per cent of the world’s most arable uncultivated land, but which imports over £27.6bn in food a year, according to a report by the African Development Bank.

In Ghana, they’ve been bolstered by the government, which is in the midst of an ambitious national rollout to increase agricultural capacity and entice young people back to the farm. As in much of the rest of the continent, Ghana’s farmers are ageing, even as young people pour into cities in search of jobs amid skyrocketing youth unemployment.

Rolling up sleeves and bucking convention, some young farmers have left behind cushy jobs. They tend to be people who have the means to lease or buy large tracts of land, and afford a loss. They often have little more training on how to rear chicks and till soil than from YouTube videos. But underscoring their work is a sense that what’s at stake is Africa’s economic future.

“We have to make farming sexy,” says Emmanuel Ansah-Amprofi, as labourers on his farm in Gomoa Mpota, in the central region, plant cassava shoots in neat rows.

A few years ago, Ansah-Amprofi was working in immigration law, when he discovered in a local market that the onion he was buying had been imported from Holland.

“I was really angry with our country,” says Ansah-Amprofi, 39. “How can we be importing this much vegetables, and have a lot of youth on the street? How can we have all this land, good weather, a lot of water bodies, but we still are importing onions?”

“I went straight to my home and Googled, ‘How difficult is it to farm?’”

Two years later, in 2016, he started a farm growing a variety of fruits and vegetables, and also helped to found Trotro Tractor, an app that lets farmers who once tilled by hand locate and rent shareable tractors. For Azumah, 27, the future is giant rats. And giant snails.

Both are a rare delicacy here, and typically harvested from the wild. Azumah, who has a bachelor’s degree in social science, spotted a missed opportunity: captive breeding. When he told his mother, Martha Amuzu, she wept.

“Oh, I cried,” she says, sitting in the family farmhouse in the Volta region, about four hours from Accra, the capital. “My expectation for him was to advance his education, to work in an office wearing suit and tie.”

Outside her doorstep, her son has transformed what was once a small subsistence plot into “West African Snail Masters,” his snail hatchery.

He has just begun with 500 fist-size land snails plucked from the forest floor in Ghana in the rainy season, when they are plentiful. On a recent afternoon, Azumah wandered between the newly built pens, testing soil moisture and alkalinity. In another outbuilding, he fed leaves to pens of the giant rats, also known as grasscutters.

When his mother saw his modern methods, she was won over. “There are others working in white-collar jobs and they hardly get paid,” she says.

Azumah now produces online workshops to get others interested in raising snails. “I see a university degree as, you have learned to think outside the box, to come up with solutions” to problems like poverty and food insecurity, he says.

Though about 60 per cent of Africa’s population is younger than 24, the average farmer’s age is 60, according to the UN Food and Agriculture Organisation. Without intervention, experts say, Africa runs the risk of having no one to replace its farmers as they die.

At the same time, low use of fertiliser, and reliance on things like rain-fed irrigation, has left Africa with crop yields that are only 20 to 30 per cent of what could be produced, research has found. While there are large, successful farms on the continent, most farmers in sub-Saharan Africa are smallholders, cultivating an acre or less. Many farmers are hardly able to feed their families, much less engage in business ventures.

Since President Nana Akufo-Addo took office in 2017, Ghana has made raising the productivity of its agricultural sector a key initiative.

Augustine Collins Ntim, the deputy minister for local government and rural development, says he was struck to find on his travels to the United States and Europe that some farmers were well-to-do.

“You come back home in Ghana, our farmers are living in abject poverty,” he says. “The gap is political commitment and leadership.”

Over 2,700 agricultural officers, each issued a motorbike by the government, have been deployed across the country to educate farmers on best practices, such as which crops are most adapted to climate change. Even with government support, farming still carries such a stigma that teachers chide students that if they don’t study hard, they’ll end up growing cassava.

But celebrities have answered the call: a pop song features singers riding tractors and exhorting children to start farming, and there are several farming reality television shows.

“We have to show people farming is bling,” says Emmanuella Pi-Bansah, a graduate student in charge of shelling escargot at West African Snail Masters.

In cuff links and tie, seated in his mansion in Accra, Richard Nunekpeku, 34, wants to project what this new breed of agripreneur can achieve. Five years ago, he left a high-paying job as an international marketing manager for Samsung to raise fowl, cereals and vegetables through a cooperative, Anyako Farms.

It hasn’t been easy. His first year, he invested nearly £63,100 in planting maize – but without irrigation, a dry spell wiped out the crop. The harvest earned just £6,300.

Drawing on his corporate background, Nunekpeku started over, hiring researchers in soils and fertilser, and investing in high-tech irrigation. This year his farm is on track to break even for the first time, he says.

A boom in technology that aims to increase productivity is helping make agriculture more modern and lucrative. The number of agricultural technology start-ups in Africa has grown exponentially from 2016 to 2018, according to a report by Disrupt Africa, a technology news site.

For some young farmers, it is not enough just to lure their peers into the sector. Nana Adjoa A Sifa, 31, who has a degree in psychology, wants to utterly change how farming is done.

After years of working to engage youth and women in farming, she became a farmer herself. And she uses no pesticides on her farm, Guzakuza, planting mutually beneficial vegetables on a single plot.

“I want to transform mindsets, and Africa,” Sifa says, holding an organic carrot seedling. “If we fail, it means the industry has failed. It means we have failed many young people.”