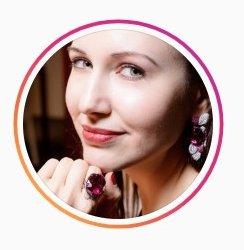 THE FACE Ms. Perez, born in Russia and now based in London, is a trained gemologist and cut her jewelry teeth on the retail floor at Asprey, Tiffany and Chaumet.

THE BLING As a former sales manager and supervisor, Ms. Perez has said unabashedly that she wants to “increase the desirability” of high jewelry. Her account focuses solely on the top-end category and precious gemstones, with most posts featuring her draped in dazzling haute couture creations. “In the past you wouldn’t see high jewelry so much and, when you did, you’d perceive it as a museum or collector’s item — too expensive and too showy,” she said. “I show the jewelry worn because it helps people understand the volume and to envision themselves wearing high jewelry.”

THE #WINNING POST Ms. Perez holding a leaf brooch (top), an intricate pattern of diamonds, part of Boucheron’s winter-themed Hiver Impérial collection. The post garnered nearly 5,200 likes, double her usual number. “I still have no clue why this post was so popular,” Ms. Perez said, “I think it’s from the way I’m holding it, towards the camera. You almost want to reach out and take it from my hand.”

THE BUZZ “After 23 years in the business I still keep learning from Katerina’s amazing and knowledgeable posts,” said Sabine Roemer, goldsmith, jeweler and co-founder of Atelier Romy, based in London.

THE FACE Mr. Higgs has a degree in the history of decorative arts and design from Parsons School of Design in New York, and is the archivist for the jeweler David Webb.

THE BLING Mr. Higgs calls jewelry a “capsule” for storytelling, an approach that leads him to pack his longer posts with lots of back story and facts. “People are hungry for not just quippy, little throwaway emoji stories,” Mr. Higgs said. “They want someone who can provide content and context, which is what I try and synthesize with a beautiful image.” He takes all his photos with his iPhone 7S Plus. Brooches are especially prevalent on his site, as they “lend themselves best to experimentation and self-expression, either from the jeweler or the wearer,” he said.

THE #WINNING POST The Hamlin necklace from Harvard University’s Mineralogical & Geological Museum (above), which attracted almost 7,200 likes and 130 comments. Mr. Higgs was given access to the necklace, which featured what he called “super rare” tourmalines from Maine and showcased the “bounty of natural resources in America,” as well as the notebook kept by the man who commissioned the piece, Dr. Augustus C. Hamlin of Maine, which describes each stone.

THE BUZZ “Levi combines an authentic and deep understanding of two things: jewelry history and the power of storytelling,” said Rachel Garrahan, British Vogue’s watch and jewelry director. “I always learn something new from his Instagram — and I’m entertained to boot.”

THE FACE Danielle Miele, based in Nashville, began as a jewelry outsider: She has a degree in childhood education but no gem training. Now, however, she’s an industry insider: Last month she introduced another account, @jeweleryjobs, which lists jobs in the business.

THE BLING Gem Gossip started 10 years ago as a blog focused on rings; today, Ms. Miele’s #showmeyourrings has more than 525,000 posts on Instagram. A self-proclaimed “collector at heart,” her style is definitely maximalist. “My pictures have to have a lot of stuff in it,” she said, likening them to treasure hunts where people can zoom in and find things. “I want people to stop scrolling and look closer.”

THE #WINNING POST Her personal collection of figa charms (above). Figa, or fig, is a somewhat vulgar hand gesture using two fingers and a thumb that dates to Roman times. Ms. Miele’s pieces, carved from a host of hard stones, were displayed in a rainbow spectrum — and the post drew more than 3,000 likes. “People went nuts over it,” she said. “Anything rainbow is very popular with jewelry. It’s become a trend, and more and more jewelers are adding rainbow lines.”

THE BUZZ Caroline Morrissey, head of jewelry sales in the United States for Bonhams auction house, likes what she calls the account’s “huge range of creativity.” Ms. Miele’s posts, she said, “regularly make me think out of the box. I also get a multiple jewelry fix in one Insta post as it usually contains more than just one piece — something for your eyes to feast upon, for sure!”

THE FACE Threads is more than just a social media account for voyeuristic fashionistas, it’s also a thriving personal shopping business aimed at millennials. (It has been listed twice on The Sunday Times of London’s Tech Track 100 list of the country’s fastest-growing private technology companies.) Instagram is considered its shop floor, with all sales conducted through messaging apps such as WeChat and WhatsApp. In March, Threads recruited Sophie Quy, Net-a-Porter’s senior buyer of fine jewelry and watches, to grow its jewelry business.

THE BLING Threads represents about 50 jewelry designers, ranging from independent brands to the big houses, with prices from 1,000 pounds to more than £1 million, or about $1,300 to about $1.3 million. The images are meant to “talk to and inspire clients,” Ms. Quy said — like the many cool ways to wear jewelry (stacking, whether rings or bracelets, is common). The content is notably exclusive — hashtag #ShotByThreads — and presented in a glossy magazine style.

THE #WINNING POST A Bulgari Serpenti campaign (above) that was shot at the jewelry house’s London flagship, a spectacular space that few of Threads’s bricks-and-mortar-shy millennials would normally visit. The short video has had nearly 222,000 views, and drew an “amazing reaction in terms of engagement and from a retail perspective,” Ms. Quy said. “The campaign was a real highlight.”

THE BUZZ “Threads has changed the way luxury shopping is done,” said Amanda Gizzi, public relations and events director for the Jewelers of America trade association and its annual GEM Awards. “As a 2019 GEM Award for Retail Excellence nominee, it’s being celebrated for its use of Instagram to redefine what the retail jewelry experience looks like.”

THE FACE Will Kahn, the fashion market and accessories director at Town & Country magazine, put his skills as a still-life stylist to work for his Instagram venture: All the jewelry is shown resting on Mr. Kahn’s Hermès notebook, complete with his Blackwing pencil-scrawled captions (he’s been through six notebooks in the last year, he said, adding, “I prefer the smaller size, because it makes the jewelry look bigger.”)

THE BLING Mr. Kahn calls his eye-catching posts “infographics,” and they do have an educational quality, with captions pinpointing information like carat weight or stone provenance. “Basically, it’s every question I would ask a jeweler that I’m standing in front of, and relaying to the viewer,” Mr. Kahn said. “Jewelry really requires content.”

THE #WINNING POST A surprise hit, with more than 3,750 likes, was a photograph of 12 antique-style pieces from the Greek-American designer Jean Prounis (above), arranged in a gridlike format. “I find that a lot of similar things arranged neatly do well,” he said. “The tough part is that everything needs to be arranged, otherwise it looks like a mess.”

THE BUZZ Caroline Scheufele, Chopard’s co-president and artistic director, is a fan. “I travel frequently and always carry my own personal notebook with me,” she said. “So when I discovered Will’s account, I thought it was such a clever idea to present pieces of jewelry the way they were actually born. I found it unexpected, yet elegant, clever and so creative!”

THE FACE Early this year Rachael Taylor, a jewelry journalist, and Andrew Martyniuk, who has worked in sales and marketing, started The Jewellery Cut, a multiplatform venture that includes a website, social media and events to showcase the work of midmarket jewelers. “My friends can name either big wholesale brands like Pandora or larger brands like Tiffany, but don’t know much that’s in between,” Ms. Taylor said. “There is an interesting space in the middle, of individual designer-makers and smaller brands doing interesting things, but who don’t get a lot of coverage.”

THE STATS More than 3,200 followers. Founded in January.

THE BLING True to the founders’ backgrounds, the posts are notably news-led. The Jewellery Cut’s modus operandi is to mix online content with offline events, producing eye-catching teaser posts intended to pique interest — and entice you to one of the events they are organizing or promoting.

THE #WINNING POST A collection of colored gemstone rings from the AS line, by the London jeweler Akansha Sethi (above), taken during a recent showroom event, got more than 400 likes. Mr. Martyniuk credits the many “beautiful colors” for the post’s success, adding, “In this case, online definitely mimicked real life because, as well as being our most popular post during the showroom, Akansha Sethi also sold out of this very collection at the show.”

THE BUZZ “A hidden gem of the ’gram, on-point trends and unique stories,” the British jeweler Bobby White said.