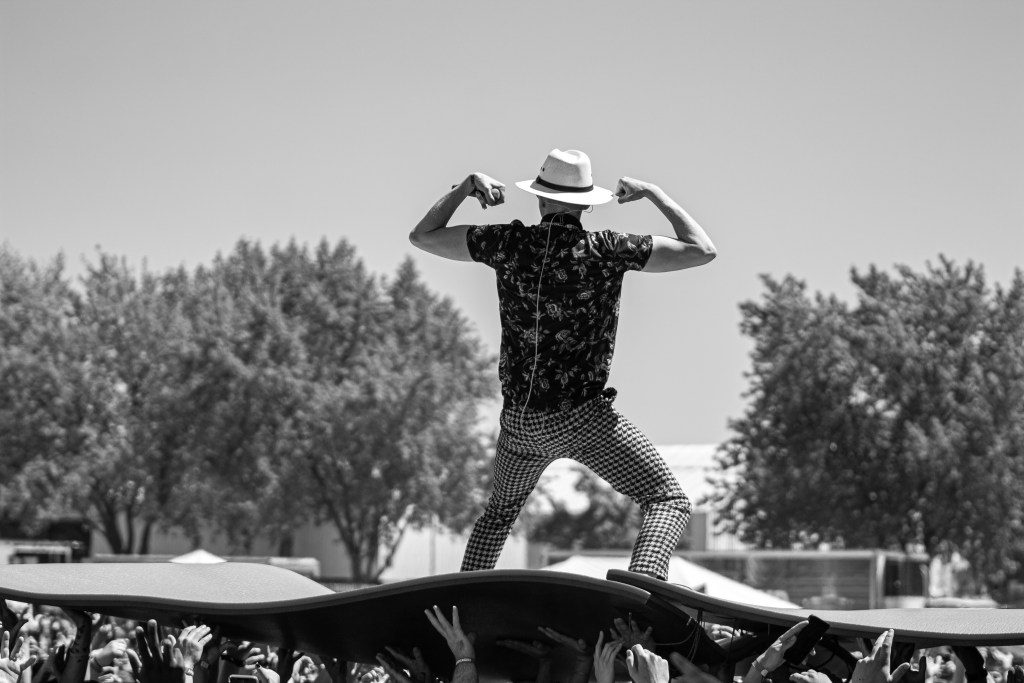 I have done a few festival recaps since I have begun working with Upcoming Hip Hop, but last year I adopted a new format that I love to write. This is, of course, the title of this recap: The Good, The Bad, and The Ugly. Soundset rolls into the state fairgrounds in St. Paul, MN every year on the Sunday of Memorial Day Weekend. Over the years there have been many ups and downs, and this year we will cover our own!

First things first, the weather was as good as it gets. 70 degrees, light wind and not a cloud in the skies. Over the years there has been everything from tornadoes to thunderstorms, but this weekend the blue skies took it.

I have covered music for a little over four years, and in that time I have seen some shows that I couldn’t believe; however, none of those shows compared to the chaos that ensued when the ever name changing, bar breaking, ape shit going, Kaiser Van Powderhorn himself Prof would take the stage Sunday. Starting by rolling out the red carpet for himself… no literally, rolling the carpet on top of the crowd and walking down it… I knew that this was gonna be just another Prof show, and just like every other Prof show it was going to be chaotic and full of energy.

It’s no secret in Minnesota that Lil Wayne’s reputation was on the line. From radio stations banning his music to fans demanding refunds, everyone was on edge as 8:30 pm rolled around and the main stage was silent, but this time the silence was broken as one of the most iconic names in hip hop took to the stage with a live band. Playing nothing but hits from ‘Got Money’ to ‘A Milli’ it was non stop energy that was reciprocated by the crowd.

My day started off at the Atmosphere and Friends stage with someone that I have loved to watch on the come up. Lu Afework, better known as Student 1, had a large crowd gathered early, but more importantly, they knew every word and even chanted his name by the end of his set. Watching the smile of pure gratitude creep across his face as he could barely continue with the joy overflowing.

The weather was incredible, but only putting one coat of sunscreen on left my ears burnt to a crisp. I wasn’t the only one who forgot what mother nature can do when we let her run rampant. From dehydrated fans to those who drank a little too much, the empty skies can take a toll after 10 hours.

While it was great to see a legend in the flesh, his voice was at times overshadowed by the live band he had performing. Live musicians for a hip hop show can be difficult to master, which is why deM atlaS only brought out a drummer out of concern for not enough time to put together a full band. While it has worked in the past when artists like Lauryn Hill took to the main stage at Soundset, for me Lil Wayne’s live band fell short.

Soundset is always stacked with talent not just on the stages but on the dance floor, skate parks and graffiti spots. While this allows for everyone to find something to enjoy, it makes it hard to find time for everything, especially for a guy like me who struggles to put together a schedule daily. While I always have an amazing time at Soundset, I usually find myself in at least one pickle and this year it was missing out on Black Starr and Atmosphere in order to photograph Lil Wayne.

Last year I was pretty bummed out when Lil Uzi Vert was a no show, so 9 months later when the lineup was released and he was back on it, I felt like it was a chance for redemption and I got my hopes up once again. However, unlike Lil Wayne, Lil Uzi once again disappointed fans at the Minnesota State Fairgrounds and left Jbird to make quick work and replace him with one of the most viral stars in the game currently Lil Nas X.

It’s not enough to be obnoxious, even worse to make your friends waste their fun time at a festival watching over your selfish drunk annoyance, but the worst was watching a guy passed out drunk getting hauled out of the crowd while simultaneously peeing his pants. This was an uncomfortable moment for the guards and the guy as he woke up trying to get back in the crowd, but mostly it was uncomfortable for the girl in the front row left to find a towel to wipe herself off.

But its ok… God loves him.

The main stage had an overwhelming amount of talent, and not surprising is where I spent most of my day. From the early time slots with Taylor Bennett, deM atlaS Beast Coast, and DMX to the new superstars in SZA, Run the Jewels and Trippie Redd it was a nonstop onslaught. As if these names weren’t enough, the last minute edition of one of the biggest names in music, Lil Nas X, had everyone chanting to ‘Old Town Road.’

My day started here with Student 1, but the stage kept calling me back with artists like Tech n9ne, Dessa, and Cashinova. This was also the stage that I missed the most as Royce, Black Starr, Bas, and Tierra Whack went unseen by myself. While I didn’t get to spend as much time there as I would have liked, it did allow me some time to check out the car shows and the delicious food in the VIP tent. One of the real winners for the day for me was the smoked bbq brat that kept me stable during Prof’s hectic set.

I don’t think there is a day I look forward to more than the annual gathering of tens of thousands at the fairgrounds over memorial day weekend. I get to see friends who have become family, family that gets a glimpse into my life in media and a plethora of artists that I can now knock off my bucket list. All of the fun aside, none of this is possible without the hundreds of crew members, people behind the scenes, management, lighting, sound, sponsors, etc. And that’s what I want to leave this article with, a huge thank you to those that make this one day run as smoothly as possible.