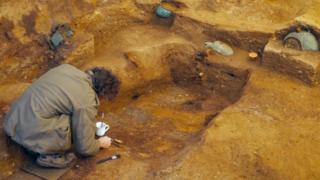 A royal burial site found between a pub and Aldi supermarket has been hailed as the UK’s answer to Tutankhamun’s tomb.

Workmen unearthed the grave, which contained dozens of rare artefacts, during roadworks in Prittlewell, near Southend, Essex, in 2003.

Tooth enamel fragments were the only human remains, but experts say their “best guess” is that they belonged to a 6th Century Anglo-Saxon prince.

It is said to be the oldest example of a Christian Anglo-Saxon royal burial.

When a team from the Museum of London Archaeology (Mola) excavated the site, they said they were “astounded” to find the burial chamber intact.

The remains of the timber structure, which would have measured about 13ft (4m) square and 5ft (1.5m) deep, housed some 40 rare and precious artefacts.

Among them was a lyre – an ancient harp – and a 1,400-year-old box thought to be the only surviving example of painted Anglo-Saxon woodwork in Britain.

Gold coins, the gilded silver neck of a wooden drinking vessel, decorative glass beakers and a flagon believed to have come from Syria were also found.

Each had been placed within the tomb “as part of a carefully choreographed burial rite”, indicating the resting place of a man of princely lineage, they said.

Locals nicknamed the grave’s unknown occupant the Prince of Prittlewell and the King of Bling because of the riches buried alongside him.

It had been suggested the remains were those of Saebert, Saxon king of Essex from AD604 to AD616

But carbon dating and other tests have indicated the tomb was constructed between AD575 and AD605 – at least 11 years before his death.

After 15 years of research, archaeologists said their “best guess” was that the tomb belonged to Seaxa, Saebert’s brother.

Fit for a prince

Sophie Jackson, Mola’s director of research and engagement, said no-one had expected the “unpromising looking site” found in 2003 to contain “our equivalent of Tutankhamun’s tomb”.

“It’s between a bit of railway and a bit of road, essentially a verge. It’s not where you’d expect to find it,” she said.

She said the grave provided a snapshot of a “really interesting time” when Christianity was “just creeping in” to the British Isles.

“They would have been just on the transition between having pagan burials with all your gear but also having these crosses,” she said.

Ms Jackson said “the best guess” was that the tomb had housed Seaxa.

She said: “There’s a lot of debate about whether he was a fully-fledged hairy beast Saxon warrior, or younger.

“Had he died before he could really prove himself?”

Tutankhamun was an Egyptian king who died about 3,000 years ago.

His tomb was discovered by British archaeologist Howard Carter in 1922 in an area now known as the Valley of the Kings.

It was one of the most well-preserved tombs that conservationists had ever seen, and close to 2,000 objects were found inside.

The chamber was filled with treasure and detailed wall paintings that showed the story of King Tutankhamun’s life and death.

After the treasures had been catalogued and cleared, the tomb itself became a tourist destination when it was opened to the public in the 1930s.

Research was undertaken by more than 40 experts in various fields, who worked together to reconstruct the chamber.

In some cases, items had been so badly eroded that only soil impressions remained.

These artefacts were digitally recreated using techniques including CT scans and microscopic analysis of soil samples.

Some of the recovered artefacts will be displayed at Central Museum in Southend from Saturday.

The museum has also launched a website with information about its research, as well as an interactive diagram of the tomb.

Save a Custom Skateboard Design

Custom Cruiser Skateboard Decks are Back