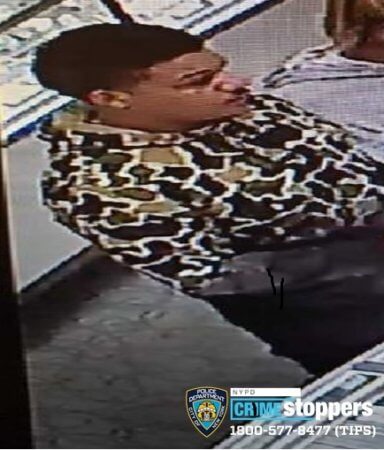 BY GABE HERMAN | A man used a Chelsea resident’s personal information to fraudulently purchase thousands of dollars worth of jewelry earlier this year, police said.

The victim, 49, reported that on Jan. 9, around 10:30 a.m., in a residential building near W. 15th St. and Seventh Ave., he discovered that his personal information had been compromised. Not only that — but his information had been used to open a charge account with Kay Jewelers.

After an investigation, it was found that a man entered the Kay Jewelers at 5376 Kings Plaza in Brooklyn, in King’s Plaza Shopping Center, and made about $10,000 worth of purchases on the fraudulent account.

Police released a surveillance image of the suspect, who is wanted for grand larceny. He is described as having an afro hairstyle and was last seen wearing a dark green military-patterned coat with black jeans.

Tips can also be submitted on the CrimeStoppers Web site at WWW.NYPDCRIMESTOPPERS.COM, on Twitter @NYPDTips or by texting to 274637 (CRIMES) then enter TIP577. All tips are strictly confidential.