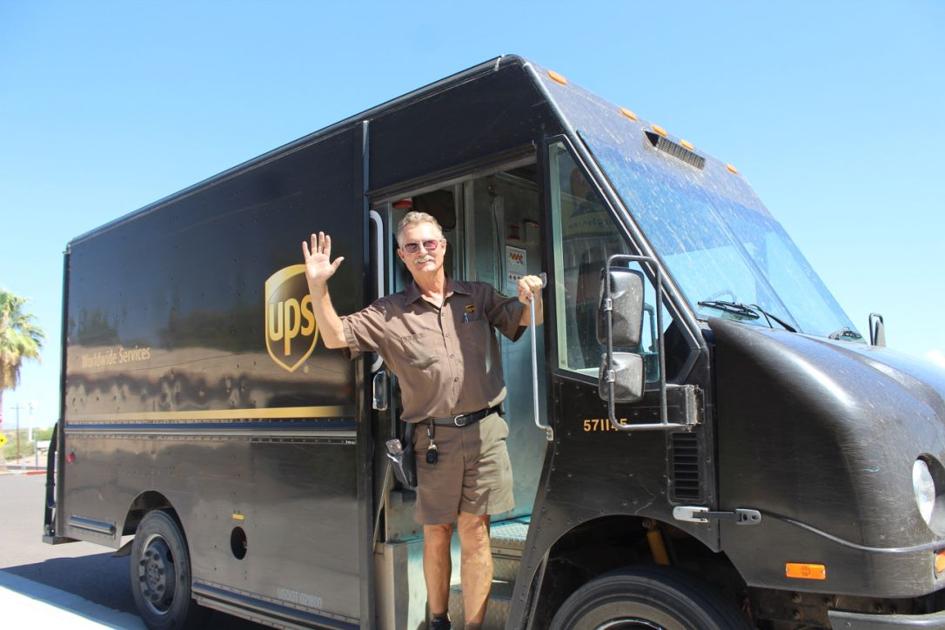 Wickenburg residents have had the pleasure of Jeff Henson delivering their UPS packages to them for 36 years, but that came to a halt Aug. 28 when Henson made his final deliveries for the shipping company.

“He’s amazing, amazing, amazing,” said Tammy King of Cowgirl Bling Bling. “He has the kindest heart. I could call him when I missed a box and meet up with him to get it. I can’t say enough things about him. He will definitely be greatly missed.”

Bruce Meier of Ben’s Saddlery has been impressed with Henson’s attention to detail as he handled his tasks.

“For the 30-plus years he was with them, there was no one more loyal and who could be counted on to show up every day to do his job,” Meier said. “He was the consummate professional when it came to UPS and that job.”

It was because of slowdown in the construction industry in the early 1980s that Henson turned to driving and delivering for UPS. He was doing concrete finishing work, but there just wasn’t enough it at the time. Then he found out UPS was hiring.

The son of Joe Henson and JoAnn Henson-Mallicoat graduated Wickenburg High School and knows everyone in Wickenburg.

“Anyone who has been here for awhile knows who I am,” he said.

“I’ve been able to do a lot and for my family because of this job,” he said.

The job has changed a lot over the years, but the glaring change Henson said is poundage. When he first started with UPS in 1983, the maximum amount of pounds allowed to be ship was 50, now it’s 150 pounds.

“When you to take those 150 pounds up to the second floor, those are always interesting,” Henson said. “You have to pump yourself up like a weightlifter.”

He enjoyed the folks he delivered packages to along his route. They were easy for him to get along with during his workday.

“Everyone is happy to see the UPS driver,” he explained. “It’s almost like Christmas for them.”

When Henson started in Wickenburg, there were two drivers to deliver packages. Today there are six that cover the area. He estimated UPS went from about 15 million pieces of parcel in 1983 to about 86 million today, a lot of that having to do with the creation of the internet.

One of those days

Everyone has experienced one of those days at work, and Jeff Henson has many memories from his 36 years as a driver for UPS.

On one particular day, he was down Grand Avenue delivering a package. He heard a loud boom and looked around.

“It sounded like the trash guy was picking up a dumpster and the thing just crashed down,” he said. “I saw telephone wires swinging, and I looked over and saw that some kid had nosed into a telephone pole at 60 mph in front of the post office in Morristown.”

Henson went over and helped the kid. The driver ended up being OK other than breaking both his legs. Henson stayed with him until the fire department showed up and took over the situation.

A few deliveries later, Henson made his way to Circle City and stopped at an address to which he had a package to deliver. He saw what he thought was a guy working under his trailer.

“I went over and I could tell he was dead as a nit,” Henson said. “I took his pulse on his neck, and when I placed my hand on his heart I could feel a pacemaker. This was less than an hour after the accident.”

The day got even tougher on the retired UPS driver, as he was the one who had to knock on the door and tell the man’s wife to call the fire department and why.

While driving for UPS, dogs bit Jeff Henson nine times, and he only counts the bites that bled. That’s one less than all the days he missed over 36 years. He admits there are a lot of dogs he’ll miss.

That’s because he figured out the secret to dogs.

“Once I started carrying dog biscuits, everything changed,” Henson explained. “They’re dogs. They have an IQ of 26. They see a guy in a hurry going to the front door, they figure something is going on.”

Henson said he’s had customers tell him as he neared his retirement day that their dogs were going to miss him.

“They were always happy to see me,” he said.

First things first now that Jeff Henson is retired. His wife Kristy has a few things in mind for him to occupy his time.

The Hensons are also preparing for their daughter Kelsey’s wedding next month, and then after that he may look at finding something part-time or perhaps volunteering.

He’s in no rush and is looking forward to his “retirement” vacation. They’ll be taking a trip to Scotland and Ireland, where Henson will definitely hit the links.

And though he is just wrapping up his first week retirement, he does have his eyes set on Christmas. He won’t be out late delivering last-minute gifts as part of his job this year.